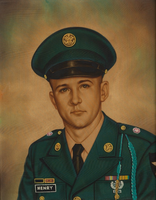 Lawrence “Skip” G. Henry, 75, of McGraw, New York peacefully passed away Sunday, October 13, 2019, with his wife, Vivian, and his son, Trampas, by his side at the VA Hospital in Syracuse, New York.

Born May 31, 1944, at home in Blodgett Mills, NY, Skip was the son of the late Albert and Mary (Bolt) Henry. He served his country from 1967-1970 in the United States Army.  He honorably served 18 months in Korea, he was also stationed in Fort Knox in Kentucky and Fort Dix in New Jersey.  Skip worked for the Barker’s Tree Service in California. Skip returned to Vivian in New York and returned to work for F.G. Compagni.  He worked for Orchard Earth and Pipe until retirement at age 65. Skip was an avid hunter for most of his life. After retirement Skip could be found either in his back yard in his shack or garden, across the road at his brother Ken’s house, or at camp with his brother Doug. He loved watching his grandson, Jonathan, race around the yard on his dirt bike or four-wheeler.

In addition to his parents, Skip was predeceased by his two sisters, Alice Dutcher and Ethel “Tootie” Homer, his brother, Dudley “Slim” Henry, his sister-in-laws Wilma “Midge” Henry and Claudia Marcin; his brother-in-law Claude “Mac” Arnold; and his best friend Alton Carr. Skip’s brother Robert is still listed as M.I.A. from Korea.