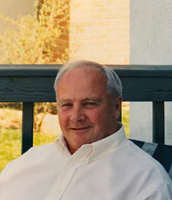 Robert B. Stiles (Bob) passed away at the age of 87 in King, NC on November 20, 2019. Bob was born in Cortland, NY on September 10, 1932 to Jean (Moore Smith) and Jared W. Stiles, Sr. He was one of four children, brother to Jared Stiles, Jr., Edward Stiles and Ann (Stiles) Taylor. His father was a founding member of Grange League Federation (GLF), which later became Agway. Jean (Smith) Stiles practiced as a nurse in Cortland. The Stiles family later farmed their land on Groton Road in Cortland. Bob met his wife, Esther (Ferro), also of Cortland, NY, while in high school. They married and had 6 children, Robert Stiles, Jr. (Robin), Deborah Stiles (deceased in infancy), Garrett Stiles(Beverly), Bradley Stiles (Tammy), Judith Farkas (Michael) and Barbara Price (Tom). Wanting a better life for his family, Bob became involved in real estate and moved his family to the neighborhood of Bayberry in Liverpool NY. Always the optimist, Bob felt Liverpool had the potential of becoming a great place to raise his family and might provide a stepping stone to success for his children. His instincts were correct. Bayberry was the perfect neighborhood, which included an incredible school system surrounded by great people who became life-long friends. Bob was a wonderful, loving dad, husband and mentor. He set a great example for his children through his work ethic and love for family. All five of his children were very active in high school and college sports and he, along with Esther, never missed a game. They were their kids' biggest fans. His life was wholly dedicated to his family, especially to his beloved wife of 47 years prior to her passing in 1999. He later spent time in Ohio, Florida and North Carolina to be close to his children and spoiling all of his grandchildren, along with pestering his sister Ann. Bob's favorite pastimes included gardening, baking, and genuinely bringing laughter and joy to others. Bob is survived by many adoring nieces, nephews, grandchildren, great-grandchildren, former neighbors, friends and family members who will miss his strength, love, and the care he showed to them A calling hour will be Monday 11 am-12 pm with a funeral to begin 12 pm at the Wright-Beard Funeral Home Inc., 9 Lincoln Ave., Cortland NY, 13045. Burial will follow at the Cortland Rural Cemetery.