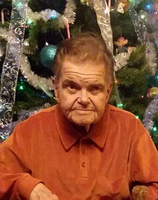 Donald Leo McCall, 78 of Truxton, passed away Thursday, January 23, 2020 at the St. Joseph's Health Center Syracuse surrounded by his loving family. He was born on September 17, 1941 in Cortland to Leon H. McCall and Theresa Miller. He was adopted by his Aunt Mabel McCall Muckey at the request of his father at his passing. He was a life-long resident of Cortland and Truxton. He graduated from St. Mary's Parochial School in 1959. Don worked as a chef for the Queen-Air diner and George Junior Republic before becoming a foreman at Overhead Door and McGraw Box. He then became a Licensed Practical Nurse at Highgate Manor for over 25 years before retiring in 2006. He was an avid antique car enthusiast with a love for Pierce Arrows and Kaisers. He also enjoyed classic movies and listening to operatic and Irish music. He was a member of the Cortland Antique Car Club, Ancient Order of Hibernians, 3rd Degree Knight with the Knights of Columbus, Irish Northern Aid, and a former member of the Truxton Fire Department. He also hosted many children from Project Children and as a foster parent. Don also served as historian for Truxton for over 50 years. He was a communicant of St. Patrick's Church- Truxton and most recently St. Anthony's of Padua of Cortland. Don is survived by his sister Joan (William) Bristow and a brother Anthony (Claire) McCall; daughters Deanna (Leslie) Griffin of Arkansas, Jessie Crouch of Truxton, Donna (Richard) Wells of Virginia, and Molly (John) McDermott of Truxton; sons Timothy (Anjanette) McCall of Truxton and Ciaran (Ashley) McCall of Groton; Grandchildren: Lindsay, Zachary, Bridget, Courtney, Mallory, Ryan, Erien, Nicholas, Timothy Jr, Kyle, Tressa, Mickyla, Morgan, Seán, Baillié, Caolán, and Cillian; Great-Grandchildren Kimberly, Mason, Matthew, Liam, Taylor, Jacob, Paxton, Alieah and Jaxon. In addition to his parents, he was predeceased by his wife Shirley in 1993 and great-grandchildren Mariah, Zoe, Madison, and Ava. Calling hours will be Tuesday from 1-3PM and 6-8PM at the Wright-Beard Funeral Home and a mass of Christian Burial at St. Patrick's Oratory Truxton Wednesday at 11 AM with Father Joseph Phillips as celebrant. Interment will be in spring at the convenience of the family. In lieu of flowers, donations can be made to St. Joseph Dialysis Center – Cortland, American Kidney Foundation, Mendedhearts.org or St. Jude's Children's Hospital.