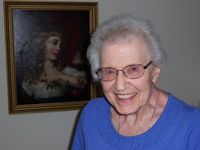 Margaret H. Fiske, 99 of Cortland passed away on September 3, 2020 at Groton Community Health Center. She was born on November 19, 1920 in Homer, NY a daughter of the late R. Curtis and Marion McMaster Harris. Margaret was employed by New York Telephone for 39 years, she started as an operator in Homer, and worked her way up to be the last manager of the Cortland Office until it closed in 1979, she then worked in the Hamburg, NY office until her retirement in 1982. Margaret was a lector serving for several years at St. Margaret's Church, Homer. She was a past member of Business and Professional Women's Club, member of The League Women Voters, and a member of the Telephone Pioneers. Margaret enjoyed volunteering at the Cortland County Historical Society. After her retirement Margaret served on the Salvation Army Board and Community Services Board and their committees. She also volunteered for 20 years as a volunteer counselor at Family Counseling Services. Some of her favorite activities were genealogy, traveling, reading and serving the community. Margaret is survived by her two sons, William "Bill" Fiske, David (Debbie) Fiske, one daughter, Melissa Tyler, two brothers, Roger Harris, Jaffrey (Nadyne) Harris, one sister, Rev. Diantha Brown, three grandchildren, Gregg Fiske, Jennie (Joseph Infurnari) Fiske, Megan (Brian) Lavine, two great-grandchildren, Gregg and Gianna Fiske, a sister in law, Nancy Harris and several nieces, nephews and cousins. Margaret was predeceased by her loving husband, Donald Fiske, daughter in law Eileen Fiske, two brothers, Theodore Harris, Richard Harris, two sisters, Edith Dewey, Rachel Mackey, a sister in law Arlene Harris and brother in law Michael Wimer. A Memorial Mass and Calling Hours will be announced at a later date, at St. Margaret's Church in Homer, NY.