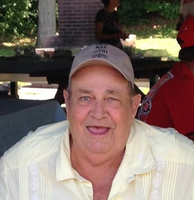 John L. Knout, 82, of Cortland passed away January 11, 2021 at St. Joseph's Hospital, Syracuse. He was born May 6, 1938 in Cortland the son of the late John and Louise Yelle Knout. John was a longtime resident of the Cortland/Homer area. He had worked for many years at Brewer-Titchner Corp. before retiring. He served as a Union Officer and Steward while working at Brewer's. After retiring from Brewer's he began driving bus for the Homer School District and referred to that time as his most enjoyable work. John enjoyed hunting, fishing, gardening, and woodworking. He was a communicant of St. Mary's Church and a member of the Cortland Moose. His family will cherish his memory as a loving husband, father, and grandfather. He is survived by his wife of 62 yrs Bonita Knout, his children Donald Rice, Vickie & Donald Elliott, Shellie & Paul Blaisdell, Jackie & Henry Brown, his brother Eugene & Charlotte Knout, thirteen grandchildren, twenty five great grandchildren, one great grandson, nieces, nephews, and dog "Mr. Murphy". A private memorial service will be held Thursday January 21, 2021 1 pm at the Wright-Beard Funeral Home with Joseph Zareski presiding, and will be streamed https://www.hdezwebcast.com/show/john-knout-live-stream or by visiting the Wright-Beard Funeral Home website where John's obituary may be seen and selecting funeral stream. Online condolences may be left at www.wright-beard.com