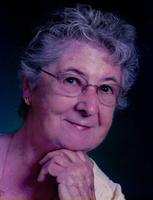 Eleanor Bush, 90, of Homer NY, passed away February 28, 2021 at home with family by her side. She was born October 26, 1930 in Woburn, Mass., the daughter of the late John and Mary Kurtyka Zurkan. Eleanor was raised and educated in Massachusetts, graduating as Valedictorian of her high school class. She married her late husband Rodney prior to relocating to Homer, NY. Upon her arrival to Homer, she became Cortland County's first female bank teller with Cortland Savings Bank. During her career she enrolled in banking courses, and spent nearly all her professional career at Cortland Savings Bank retiring in 1995 as Bank Auditor. Eleanor was a longtime member of the Homer United Methodist Church, where she served as financial secretary for over twenty years and member of the Homer Methodist Women's group. She volunteered at the Community Home Store, served as a 4-H leader and was an avid bowler. She is survived by her children Merry V. Bush, Rodney D. (Susan) Bush Jr., Christine (Philip) Langlois, and John Z. Bush, her twin sister Lillian Cooper, her grandchildren Dustin Bush, Thomas Zurkan, Chuck Ingrahm, and Ami Ingrahm, nieces and nephews, Eleanor was predeceased by her parents, John and Mary, her husband Rodney Bush Sr., and her infant brother John Zurkan, Jr. A calling hour will be Thursday 1-2 pm with a funeral service to begin 2pm at the Wright-Beard Funeral Home Inc., 9 Lincoln Ave., Cortland NY, 13045. The funeral service can be streamed directly at https://www.hdezwebcast.com/show/eleanor-bush,or by visiting the Wright-Beard Funeral Home Inc., website and viewing Eleanor's obituary and choosing Live Funeral Stream. Contributions may be made to Hospicare/Cortland, 11 Kennedy Pkwy, Cortland NY, 13045 or Cortland County SPCA, 879 McLean Rd., Cortland NY, 13045.