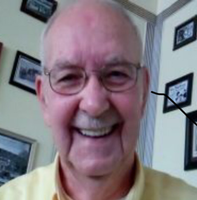 John I. Snowberger, Sr., 81, of Cortland, passed away peacefully at home on Thursday, March 11, 2021. He is now with his Lord and Savior. He was born on August 05, 1939 to the late Clyde & Zipporah Williams Snowberger. He graduated from Dryden High School in 1957 and was married to his predeceased wife of 44 years, Bessie Todd, in April 1959. He worked for the Ithaca Gun Company, straightening shotgun and rifle barrels for a few years, then in the mid 1960's he joined the Carpenters Union in Ithaca, NY. After a few years, John went on as a self- employed contractor in the Ithaca and Cortland areas until he retired in 2008. John was an avid small and big game hunter. In the early 80's he joined the Cortlandville Fire Department and decided to join the Rescue Squad. John went for training at the Tompkins Cortland Community College to become an Emergency Medical Technician. John also volunteered through the Retired and Senior Volunteer Program (RSVP), helping at several locations. John was a former member of Snyder Hill Baptist Church in Ithaca, NY serving as a board member and very active in the church bus ministry. John's predeceased wife went home to be with her Lord and Savior in September of 2003. John is survived by his brother Gene Snowberger of Florida and his sister Linda (Joseph) Rhodes of Florida. His children John (Mindy) Snowberger Jr. of South Carolina, Gail (Steve) Logan of Arizona, Brenda Marchewka of New York, and Matthew Snowberger of New York. Four grandchildren Tad & Talia Logan, Shawn Cornell and Brittany Carner, great grandchildren and many nieces and nephews. John is predeceased by his two brothers James Snowberger of New York, Charles Snowberger of North Carolina, and his son Clark Snowberger of New York. There will be no memorial services. Burial will be private in Willow Glen Cemetery, Dryden, NY at a later date. Contributions in John's honor can be made to God's Lighthouse of Praise, 98 Port Watson Street, Cortland, NY 13045. John's family would like to extend a special thank-you to Hospicare for their love and support. John will be greatly missed by his loved ones and friends. They are comforted by the assurance that he is rejoicing in the presence of his Lord. To offer online condolences please visit www.wright-beard.com.