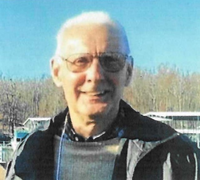 Carlton James Maxson April 19, 1936 – September 1, 2021 After a courageous battle with cancer, Carlton James Maxson went to be with his maker September 1, 2021. Carl was born first child of Eleanor and Edward Maxson April 19, 1936 in Cortland New York. Preceded in death by his parents, survived by his wife Carol Yvonne Maxson, son James Maxson, daughter Debra Young, brothers Ronald and Bernard Maxson, grandchildren Brian Maxson, Blake Maxson, and Michael Young, 3 great grandchildren, and numerous nieces and nephews. Raised in Truxton New York, graduated Valedictorian of Truxton High School in 1954. Max, as he was known, participated in all high school sports. He would go on to graduate Magna Cum Laude in 1958 from State University of New York in Albany with a bachelor of science degree. During his time at SUNY Albany, Carl was a two year All American in Soccer, and the MVP of the Soccer team in 1958. He received his master's degree of Mathematics at University of Illinois at Urbana in 1961, which led him to State University of New York in Buffalo and received his PhD of Mathematics in 1967. While working on his master's degree, he began his teaching career by teaching high school in Hammondsport New York then moved to teach college mathematics at State University of New York in Fredonia. 1969 Carl accepted a teaching and research position with Texas A&M and moved his family from New York to Bryan Texas. Carl was employed at Texas A&M for 33 years, retiring in 2002 with Emeritus status and numerous accolades including supervising 14 PhD students, 157 Publications, 77 Colloquium talks, and 50 invited Conference Talks. Due to his involvement with PhD students, the Maxson Lecture Series was crated in 2007. Carl received an Honorary PhD at Johannes Kepler University, Linz, Austria, 2011. Carl was a proud and loving father of Jim and Debi, and him wife, Carol, throughout their 64 years of marriage. When not in his office at A&M, he was busy coaching Little League, Playing men's softball, and most of all played basketball twice weekly with a group of men, for over 20 years. Carl was a lifelong Methodist and a member of the First United Methodist Church in Bryan since 1969 and a member of the Koinonia Sunday School class for over 50 years, making lifelong friends. There will be a Memorial Service Celebrating Carl's life on Sunday, September 26, 2021 at First United Methodist Church in Bryan with a reception following the service. In lieu of flowers, Carl requested donations to go to the SUNY Albany Maxson Mathematics Scholarship Fund, or the Texas A&M Maxson Lecture Series.