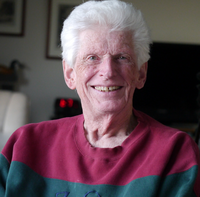 Charles M. Wheeler passed away on January 20, 2022 and is at peace. Charlie was born in Buffalo NY on June 28th 1932, the son of Charles M. Wheeler and Cleone (Kaltenbach) Wheeler. He is survived by his Brother David Allen Wheeler of Bath, NY and his wife of 53 years Carolyn (Bristol) Wheeler of Homer, NY. Charlie led a full and rich life. He spent 3 years in the Coast Guard where he served on ice breaking ships and learned Aides of Navigation. This designation would serve him years later when he qualified to captain 42 foot sailboats and did many bare boat charters many before his marriage in 1968 and two right after his marriage. After the Coast Guard Charlie attended and graduated from Ithaca College with a degree in business. Upon joining Royal Insurance Company, USA division he was sent to Albany, Rochester, New York City and finally Syracuse NY where his training led to his heading the special accounts division of the company. It was there that he met his future wife, Carolyn Bristol in 1967. They were married at St. Paul’s Episcopal Church on September 28, 1968. In 1971 they moved to Homer, NY after purchasing the James A. Wood Agency which served as a base for writing and underwriting large commercial accounts. They sold the business in 1995 to Haylor, Fryer and Coon in Syracuse, Ny. While living in Homer, NY, he served the community well, heading the EDC and Chamber for two consecutive terms. He served as president of the SPCA and helped them out of very difficult financial times. Charlie and his wife were both Rotarians. His journeys lead him to many adventures. He became an avid curler and was a member of the prestigious curling club of Albany NY. He bare boat chartered at least 4 adventures one taking them on the high seas where his new wife became violently seasick. He loved down hill skiing, then cross country skiing and snow shoeing. He prepared a trail in his seven acre woods so we could all enjoy the beauty of this outdoor haven. But his final passion became tennis where in Cortland NY he made some wonderful and lasting friends. To those that have known Charlie, please keep him in your hearts. He was a wonderful man and affected the lives of so many people. He is at peace now and will never be forgotten.