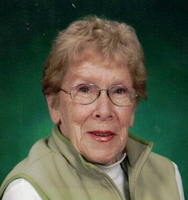 Phyllis Ann McGinley 01/20/1931-02/15/2022 passed away peacefully on Tuesday February 15th, 2022. Predeceased by her parents Harold (HEK) and Evelyn Bonnen Kenney and her daughter Erin McGinley, and sisters-in-law Sherry Kenney and Barbara Kenney. Survived by her siblings Gene Kenney, Donald Kenney, and Fran (Jim) Earles. Her children Kevin McGinley (Arona) of Florida, Brian McGinley (Judy Trong) of California, and Kelly Funk of Cortland NY. Her grandchildren Emma Porter, Huston Palmer, Shane, Liam, Quinn, and Rowan McGinley, Brianna, Whitney, Michaela, and Austin Funk. Great grandchildren Hudson, Portlyn and Axeton McGinley, Lucus and Landan West, and Jace Smith. She was born in Urbana, Illinois January 20th, 1931 to Harold Eugene Kenney (HEK) and Evelyn Gertrude Kenney (Bonnen). Grew up in Urbana Illinois. Attended the University of Illinois where she met and married Charles T. McGinley. She earned a bachelor's degree from the University of Illinois in 1952 and a master's degree from SUNY Cortland in 1969. She worked in Fort Riley, Kan., and Champaign, Ill., from 1952-58. She became a teacher at Cortland Junior-Senior High School from 1959-61. Phyllis was a Professor of Physical Education from 1962-1992. She oversaw women's athletics as the acting chair of the former Women's Physical Education Department from 1981-83 and directed Cortland's Summer Sports School from 1979-90. From 1962-81, Phyllis was an assistant professor of physical education specializing in aquatics and elementary and secondary methods. From 1984-92, she coordinated student teaching and elementary methods. She returned to the College as an associate professor emerita and lecturer emerita in the Physical Education department from 2003-2005. Phyllis was inducted into the SUNY Cortland C-Club Hall of Fame in 2011. Phyllis also substituted for St. Mary's School for many years. Phyllis was active within the New York State Association of Health, Physical Education, Recreation and Dance (NYSAHPERD).She served on the organization's executive committee and was president of its Southway Zone. She also assisted the organization as a National Aquatics Council member. Phyllis was a bright spark in this world that will be greatly missed. She touched the lives of so many including many of her students. She was a wonderful mentor who shared her passion and love of teaching and athletics. Her house was always open to her students, her children's friends, and to anyone in need. She was the most caring person who went out of her way to help others, share her wisdom, and beliefs. Phyllis was a lifelong member of the St. Mary's Church congregation. Phyllis's favorite place to be was her family camp on Lake Lauzon near Blind River Ontario. She spent every summer there with her family hiking, swimming, boating, fishing, picking blueberries, and enjoying nature. She could always be found relaxing on the beach with a good book and her mother's sun hat. Phyllis's family plans to spread her ashes at the lake. Calling hours will be held on Sunday February 20th 2022 at Wright Beard Funeral Home from 2-5 pm with a service to follow. In lieu of flowers, donations can be made to Cortland College Foundation with the memo note Phyllis McGinley Scholarship. Checks should be mailed to PO Box 2000 Cortland NY 13045. To offer online condolences please visit wwww.wright-beard.com