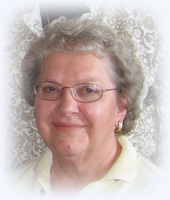 Teresa (Nottingham) Albro, age 86, of Homer, NY passed away at home from complications of Alzheimer's/dementia, July 12, 2022, with family around her. Born February 16, 1936 in Johnson City, NY., she was the daughter of the late Laurel and Ruth (Mineah) Nottingham and the wife of the late Harley M. Albro (July 2015). She was also predeceased by her oldest brother Hobart Arthur Nottingham (May 2020) and her youngest sister Elizabeth (McCormick) Clark (June 2020) and her daughter-in-law Doris (Gridley) Albro (December 2021). Terry is survived by son Philip Albro and his children Adriel Albro and Leanne (Clayton) Rice, son Stephen (Anne Fitzgerald) Albro, daughter Karen (Michael) Dillon, brother William (MaryLou) Nottingham, sister MaryAnn Jameson, brother Richard (Gene) Nottingham, several nieces and nephews, and many others who called her "Aunt Terry." She graduated Homer High School (1954) and earned a bachelor's degree at Cortland State (1959). She was proud of her degree in early childhood education and used it throughout her many years guiding and caring for children as a Sunday school teacher, VBS organizer/leader and Pioneer Girls leader at Memorial Baptist/Church of the Redeemer in Cortland. She worked for the Wilkins Company in Cortland for several years with husband Harley and son Stephen. She supported her husband, Harley, in all of his work and volunteer roles though 58 years of marriage. She made her home a welcoming place. She hosted several exchange students and many missionaries. She loved to travel and explore the many wonders the world and nature. She traveled across most of the lower 48 and to Hawaii, Alaska, Canada, Turkey, France and the Virgin Islands. She was an avid gardener, lover of nature, birder, and camper. She made the best pies. Her gentleness, kind nature and good humor stayed with her until her last days. The family would like to thank her care givers for the last 2 years Esther, Joan and Joann. We couldn't have done it without you. A memorial service will be held at Church of the Redeemer, 125 Tompkins Street, Cortland, NY Sunday July 17, 2022 at 1pm. Interment at Cortland Rural Cemetery to follow.