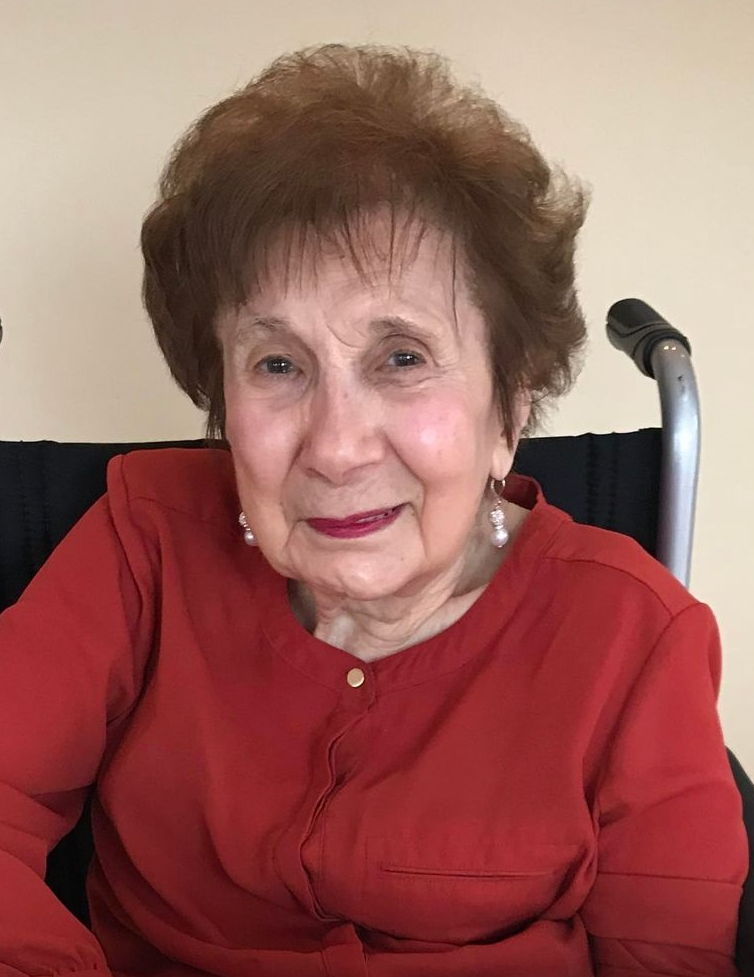 Please share a memory of Marie to include in a keepsake book for family and friends.
View Tribute Book
Marie Verrico Vecchio, 93, passed peacefully into the arms of God on November 25, 2021, at St. Camillus Health Care Facility in Syracuse, N.Y. Her passing on Thanksgiving Day gives us the opportunity to remember with thankful hearts the life she lived. The daughter of Joseph and Rose Julian Verrico, Marie was born in Cortland, New York on September 18, 1928. As a young girl, Marie enjoyed playing the piano, riding bikes, and playing outdoors with her Verrico cousins on the south side of Cortland where she grew up. In 1947, she graduated from Cortland High School. Marie fell in love with and married Alex Vecchio, after he returned from serving in the United States Army during World War II. With no siblings of her own, Marie longed for a large family and gave birth to four children, Diane, Denise, Alex, and Rosemarie. Marie and her husband worked together in an interior decorating business they opened on West Main Street in the early 1960s. They later relocated their expanded business, Decors by Alex, to Main Street, Cortland, where they served their central New York clients until the late 1980s, with home décor essentials, custom-made draperies, and carpeting. Marie always said, "our customers were our friends." Marie was an active and committed community member. When her children were young, she served on the P.T.A. and was a Cub Scout den mother. She volunteered at the Cortland Memorial Hospital as a member of the hospital auxiliary. As her children grew, she became active in Catholic Daughters of America. She served as President for two consecutive terms of the Cortland County Women's Republican Club and was also a two-term president of Zonta Club of Cortland. Marie was a member of the Board of Directors of the 1890 House Guild where she served as a docent. She also served on the YWCA Board during the 1980s. Marie was a member of the Chamber of Commerce and the Interior Design Society of America. She and Alex were members of St. Anthony's and St. Mary's Churches in Cortland. During their 60-year marriage Marie and Alex enjoyed traveling to Europe with close friends. Some of her favorite memories were riding a camel in Israel, dancing in Greece, and reuniting with relatives in Italy. In the 1970s, Marie and Alex built a permanent home and refurbished a boathouse on the south end of Skaneateles Lake where they loved to entertain friends and family. The Fourth of July was the most memorable event of the year with children, grandchildren and friends celebrating good food, fireworks, and boat rides. Marie's greatest joy was sitting up late at night with her grandsons after they came in from fishing and watching Saturday Night Live together. After their retirement, Marie and Alex spent winters in Aventura, Florida, where they were close to their youngest daughter, Rosemarie Terzo. Marie is survived by her children, Diane Vecchio, and her spouse John Stockwell of Spartanburg, SC; Denise Vecchio Van Cuyck and her husband Ray Van Cuyck of Camillus, and Alex Vecchio and his wife Deborah Pace Vecchio of Lincoln, Nebraska. She is also survived by her grandchildren who loved and adored her: Adrien (A.J) Wilson (Elizabeth) of Madison, WI; Cory (Paige) Wilson of Easley, South Carolina; Nicole Plata of Boiling Springs, SC; Christian Plata (Audra Cohen-Plata) of Madison, WI; Alex Vecchio (Jessica Herzog) of Lincoln Nebraska; Aaron Vecchio (Hannah Torres ) of Boulder, Colorado; Andrew Vecchio of New York City; Joseph Granato (Alyssa) of Paris, France; Benjamin Stockwell, Kelsea Turner (Todd) of Spartanburg and Dana Terzo Qureshy (Omar) of Fort Lauderdale, Fl. Her long and happy life was blessed with beautiful great-grandchildren: Rocco & Nico Wilson of Madison; Everett Koda Wilson of Easley; Joseph & Anthony Granato of Paris, Luca and Sylvie Vecchio of Lincoln and Azra Erbatu of Spartanburg . Marie is also survived by a special brother-in-law, Ernest Southworth of DeRuyter Lake, and many loving nieces, nephews, and cousins throughout New York State, Pennsylvania, New Jersey, Virginia, New Hampshire, and Italy. In addition to her daughter, Rosemarie Terzo, Marie was predeceased by her husband, Alex, of 60 years; her parents, Rose & Joe Verrico; an infant great-grandson, Wesley Vecchio, her loving sisters-in-law, Eva Southworth, Mary Coviello, and Fanny Vecchio; and brothers-in-law, Anthony Vecchio and Phil Coviello. Well into her nineties, Marie loved to discuss American History, politics, and word origins. She was deeply devoted to God and her Catholic religion. Marie will be remembered for her sweet personality, wonderful sense of humor, her passion for golden era movies and movie stars, and love of animals, especially cats. Thus, it is fitting that she requested donations in her name be made to the Cortland County SPCA or the church she loved, St. Anthony's of Cortland. The family is deeply grateful to the staff at St. Camillus for providing Marie with love, compassion, and excellent care. Calling hours will be held on Wednesday, Dec. 1, from 10-11:45 am at the Wright-Beard Funeral Home in Cortland, with a mass of Christian burial at 12:30 at St. Anthony's Church, followed by internment at St. Mary's Cemetery in Cortland. You can stream the service by visiting Wright-Beard Funeral Home, Inc. website and viewing Marie's obituary and clicking on live stream. To offer online condolences visit, www.wright-beard.com
Wednesday
1
December