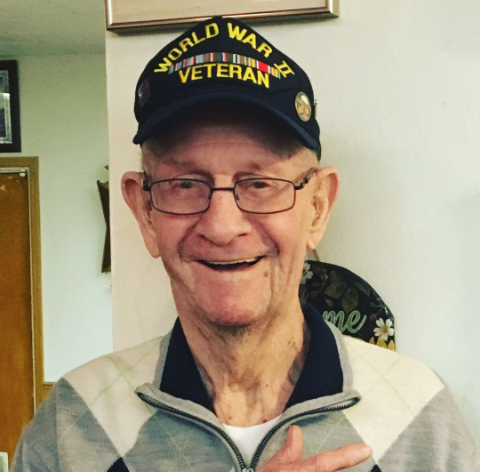 Please share a memory of James "Jimmy" to include in a keepsake book for family and friends.
View Tribute Book
James “Jimmy” Henry Weinerth - father, grandfather, decorated WWII veteran - celebrated this past Memorial Day weekend with his Heavenly family and World War II brothers. After over a century of life, he left his earthly home on Sunday, May 29, 2022 surrounded by the comfort of family. Born April 13, 1922 to Burdett and Mary Esther Weinerth in Ithaca, NY, he later married the love of his life, Antoinette Berardi of Cortland, NY in 1948, and built a life in which they would spend nearly 72 years of marriage. He was a man of honor, steadfast in his beliefs, and indulgent in simple pleasures. He stood firm in his faith, baptized at birth and receiving last rites as a God-fearing Catholic. He held the American flag in the utmost regard, representing a country he spent 4 years defending in WWII as a Paratrooper Pathfinder in the 82nd Airborne, 508 "Red Devils" Infantry Regiment. He loved keeping up with news and weather on his Apple Watch. He relished in the quiet of collecting and cataloguing coins. He maintained a drivers license until age 97. He believed in a piping hot cup of coffee to start the day and a good 5 o’clock Manhattan to finish it. He lived for his family, and was immensely proud of his son - especially the life and family he created. Some say he thought his granddaughter hung the moon - the secret is, she would have done it for him. James leaves behind son Robert Weinerth and daughter-in-law Angela Weinerth of Martinsville, VA; his only grandchild Lauren Gray Weinerth Graham and grandson-in-law Ted Graham of New York, NY; his treasured nieces, nephews, and godchildren everywhere from New York to Florida; and his beloved dachshund, Isabel “Izzy”. He is predeceased by his parents, Burdett and Mary Esther Forward Weinerth; younger brother Robert; as well as many well-loved brothers-and sisters-in law. Calling hours will be held Friday, June 3, 5pm - 7pm. A funeral mass will be held at St. Anthony’s Catholic Church on Saturday, June 4 at 10am, followed by interment at St. Mary’s Catholic Cemetery.
Online Memory & Photo Sharing Event
Online Event
About this Event