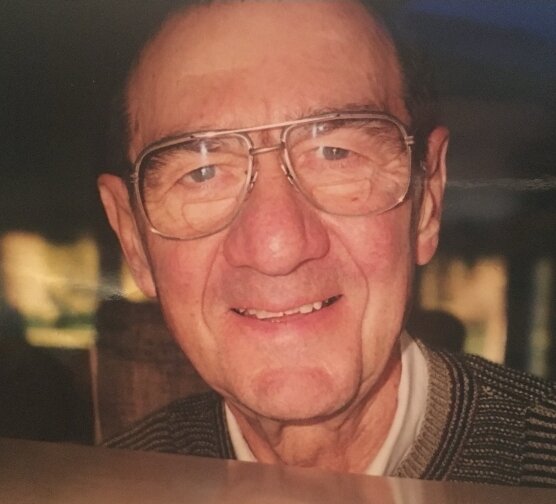 Obituary of William A. Pauldine

Please share a memory of William to include in a keepsake book for family and friends.
View Tribute Book
William A. Pauldine 98 of Cortland passed away on June 28, 2022. Bill was born in Syracuse, NY on August 14, 1923, the son of Nicola Palladino and Antoinette Masterpole. As a young child Bill moved to Cortland with his family and graduated from St. Mary's School in 1941. He served his country in WWII as a corporal in the US Army Air Force from 1943-45. In 1946 Bill married Diana James from Syracuse and in February they celebrated their 76th wedding anniversary. Bill was owner of Cortland Floorcraft from 1953 through 1982 and worked in real estate until 2002. Bill served two years on the Cortland Common Council (Alderman 2nd Ward, 1974-76), and two years as Police Commissioner (1977-79). He was a past-president of the Central NY Floor Covering Association, and a member of the Cortland Elks Club, JayCee's, Y's Men's Club and Crown City Chorus. Bill was an active parishioner, lector and member of the St. Mary's Church Choir. He was a dedicated volunteer for Cortland Memorial Hospital and the VA Hospital in Syracuse. Bill and Diana joined the Cortland Country Club in 1951. He was an avid golfer and pool player. He and his brother Nick enjoyed playing pool at many venues throughout Cortland County. Bill is survived by his wife Diana, his children Bill Jr. (Mary), Donna, Susan, Dave(Tina), Tom (Roni) and Cyndi, eleven grandchildren and five great-grandchildren.Bill was was preceded in death by his brothers Don, Gene and Nick, and his son Jeff (1992). A calling hour will be held on Friday July 1, 2022 at Wright-Beard Funeral Home, Inc. from 9-10 am. A mass of Christian Burial will also be on Friday at 10:30am at St. Mary's Church, with Fr. Joseph Zareski as celebrant. Burial will be at St. Mary's Cemetery. In honor of Bill Pauldine the family asks that an act of kindness take place in his memory. To offer online condolences, please visit www.wright-beard.com
Friday
1
July